Three fundamentals to innovating without disruption

Revolution doesn’t happen all at once — it happens incrementally over time. We have seen this time and time again, both within and outside of the healthcare industry.

In my discussion at this year's DPHARM Disruptive Innovations Conference, I shared my personal experiences sustaining innovation to drive mainstream change. As a serial entrepreneur, I have learned that incremental innovation — with a priority on curiosity, empathy, and mindfully curating choice — is key to innovation without disruption.

To successfully innovate, we must think inclusively about how new technology will change the lives of the people who may use it. The technology adoption bell curve model describes how different people react to, adopt, and accept new innovative products and technologies. The five stages of the curve include innovators (2.5%), early adopters (13.5%), early majority (34%), late majority (34%), and laggards (16%).

It's really important to think inclusively about the entire spectrum of users along the curve. While some groups, like innovators and early adopters, may find new technologies exciting and want to implement them right away, others may not see the full value of the product at first.  Everyone has different motivations when adopting new technologies, so we must be curious enough to understand every user group's different priorities and concerns. In this way, I’ve come to learn that curiosity is the precursor to inclusivity.

Different groups’ resistance is not indicative of failure — people across all industries follow this model. In the early 2000s, during the Dawn of the Internet, patient randomization for clinical trials was done entirely over the telephone. Though people in the first two groups may have adopted the internet, many clinical researchers in the latter groups worried about security and were hesitant to implement this new innovation.

My advice: accept that resistance is valid — technology can’t move from the innovation sphere to mainstream adoption without it.

Empathy goes hand-in-hand with curiosity — once we urge ourselves to understand the different needs of each group along the curve, we can use empathy to begin solving their issues.

Choosing the right approach when introducing an innovative product matters just as much as the technology itself. At Suvoda, empathy is central to our design philosophy. When we introduced our IRT software, we acknowledged sponsor challenges, empathized with their day to day needs, and provided an immediate solution that could change and evolve over time. Ten years later and not only is IRT a standard for most, but it’s now moving beyond later stage clinical trials and becoming a critical tool in an increasing number of early phase trials.

Empathy leads to a greater understanding of people’s pain points, worries, and barriers so innovators can better meet people where they are.

Becoming the curator of choice

With curiosity and empathy guiding your understanding of people’s barriers, you have a responsibility to carefully consider how best to curate your product, service, or offering. People’s decisions are influenced by the choices that innovators offer them. While freedom of choice is a good thing, having too many options to choose from creates a paradox of choice, which can actually cause more stress and adversely affect decision-making, which in turn slows transformation.

This was a lesson I learned when we introduced Suvoda’s eConsent. When we began with a comprehensive eConsent offering, there was some pushback.  We noticed that innovators and early adopters were willing to put in the work to understand the technology, but those in the early and late majority groups viewed it as an added burden to their already challenging work.

As curators of choice, we challenged ourselves to create an offering that allows different groups to utilize the product at their own pace. We wanted to provide curated options for people who weren’t yet ready to fully adopt this new technology in hopes of steering them in the right direction without disrupting their processes. We accommodated their concerns incrementally — offering a simplified eConsent approach that fit into the current flow of work and allowed for growth as users became more comfortable and processes evolved.

My advice: Offer choices and consider those choices carefully, because getting people on board in the first place is the most important step. Once there, they can move forward at their pace. Whatever that pace, they will be moving forward. And that will lead to transformation.

Innovation is a balancing act between curiosity, empathy, and offering choices — with inclusion as the governing principle. For those working to bring their technology into the mainstream, it’s critical to recognize that the main priority isn’t actually innovation — it’s helping people help themselves. Interested to learn more? Read this article from our Chief Product Officer E.K. Koh about how decentralization advances the patient-centric model. 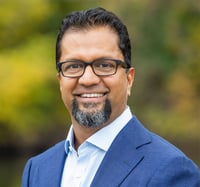 Jagath Wanninayake, President & CEO of Suvoda, is an entrepreneur and experienced executive with a background in founding and leading innovative eClinical software companies. Prior to Suvoda, he was co-founder, chairman & CEO of Clarix LLC, where he led the team that developed the first fully web-integrated randomization and trial supply management system with the industry’s shortest deployment timeline.